The pages not opened yet

The thoughts after reading the book about creation by Arvydas Malcys

The thoughts after reading the book about creation by Arvydas Malcys 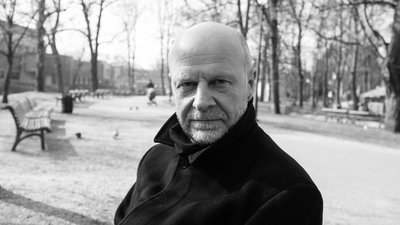 One of artists having commemorated their anniversary birthdays in 2017 was composer and violoncellist Arvydas Malcys. There were abundant events devoted to the 60-year jubilee of the said creator. During the year, his works were presented at 22 different concerts. Four of them were the author’s concerts: two author’s concerts were arranged in Vilnius, one in Kiev and one in Moscow. Generally, music created by A. Malcys is a unique phenomenon in the world of Lithuanian contemporary music. His works are often performed by famous performers and music groups, such as Camila Hoitenga, David Geringas, Sergey Krylov, Yury Bashmet, chamber orchestra Moscow Virtuosi, chamber orchestra Moscow Soloists, Lithuanian National Symphony Orchestra and many others. They perform the music by A. Malcys along the works created by composers of the same generation and the classic music on prestigious scenes. Its style is excellently fit for such a context. On the other hand, young performers prone to accepting challenges (such as Vytautas Giedraitis, Giedrius Gelgotas, Domas Jakštas, Ignė Pikalavičiūtė, trio Claviola, Vytautas the Magnus University chamber orchestra and so on) perform music created by this composer as well, and the same works sometimes sound in slightly unexpected contexts. In 2017, the Saint Christopher orchestra conducted by maestro Donatas Katkus performed “The Split Silence” by A. Malcys during the International Contemporary Music Festival DRUSKOMANIJA alongside of works by undergraduates of bachelor studies in composition. The work by A. Malcys was not out of the general stylistic context and even gained a great ovation from composers of the young generation and lovers of cotemporary music.

Such popularity among different generations is really a rare phenomenon. When I began taking an interest in contemporary music thirteen or more years ago, I mostly admired the music by A. Malcys and singled him out among the known composers of that period. In addition to barriers between generations, his creation overcomes political barriers as well. The mere fact that his author’s concerts were arranged not only in the capital of Lithuania, but also in the capitals of Ukraine and Russia was very interesting by itself. Moreover, famous Moscow publishing house „Kompozitor“ published on occasion of his anniversary birthday in 2016 the monograph about his creation “Ten Stages of Creation by Arvydas Malcys” (in Russian “Десять творческих ступеней Арвидаса Мальциса”) created by prof. Mikhail Kokzhayev. Namely the said publication encouraged me to provide this small reflection.

The book is really ambitious. In the book, ten creative works by A. Malcys are analyzed; examples of music sheets, photos of music performers and even two compact disks with records of all the analyzed works are presented. Their list includes: „The Lost in the Desert” (“Pasiklydęs dykumoje“) for a flute solo (2006); „The Horizon in the Vertical” (“Horizontas vertikalėje”) for a clarinet and a violoncello (2004); „The Shadows” (“Šešėliai”) for a trombone, a violoncello and prepared piano (2002); „The Blackthorn Eyes” (“Erškėčių akys”) for piano quintet (2009); „The Milky Way” (“Paukščių takas“) for a flute, a clarinet, a violin, a viola, a violoncello, a contrabass and piano (2004); “The Split Silence” („Perskelta tyla“) for a string orchestra (2004); The Concert for a clarinet (2007); „The Eccentric Bolero” (“Ekscentriškas bolero“) for symphony orchestra (2006); the Concert for a violoncello (Koncertas violončelei) (2009); “The Liberated Things” („Išlaisvinti daiktai“) (Symphony No. 2) (2005).

The principle of screening the music pieces for analysis was simple – it was started from creation for a soloist and gradually moved towards symphony compositions. It is evident that a discussion upon such different music works (even created by the same composer) requires applying a certain methodology. According to prof. Mikhail Kokzhayev, the key goal of the discussion was not to emphasize the formal technical aspects of the works, but to envisage an embodiment of the artistic idea by technical means of the creation - for this purpose, the author applies the own methodology described in his other book “The Topology of Music Space” (“Топология музыкального пространства”). According to prof. Mikhail Kokzhayev, the uniqueness of the style of a composer is the most important aspect of his (her) individuality that consists of three components: selection of musical expression means, organization of their processing and creation of their hierarchic interrelations.

The methodology developed by M. Kokzhayev is really interesting. The professor analyses the compositional aspect of music works by conveying non-musical meanings as well. So, this method of analysis acquires a striking semiotic nuance. A great attention is paid to small episodes of music works. In course of examining their structure (intervals, dynamics, timbre-based means of expression and so on), the researcher discovers their links with the programme ideas of the works and identifies them as emotional music symbols. Using the said symbols, he “forms” the total literary narrative of the music work reflected by processes and musical structures of a higher level.

The first thought that appears while reading the book is that an analysis of such a type is a creative process where the presented images are more dependent on the researcher than on the composer. However, on going deep into the images provided by the author and the models of their structural organization, it is able to make sure that it helps to unravel certain principles of the composition. To answer the question “why does it operate nevertheless?” it would be necessary to look at some deeper lying principles or probably assumptions of the said methodology. An analysis of contemporary music that is not bases on mathematical and (or) structural formulas is highly complicated. It is caused by an absence of any universal rule. There are only musical elements and their structural potential – the expression of archetypical models of development. Archetypes are primordial images – both symbolic (transcendental) and structural. Each structural form of a creative work can create a subjective image associated with it and each subjective image “brings” a structural potential typical for its archetype. So, an analysis of a work based on images can disclose the principles of composition that are hardly verbalized and even harder algorithmized.

The above-mentioned method of analysis has appeared to be particularly effective while exploring the semantic depth of creation by A. Malcys where abundant technical and semiotic layers were disclosed. In his music, there are manifestations of neo-romanticism, clear narrative symbols, purposefully applied sonorous means as well as subtle texture- and timbre-based nuances. In this music, various reflections of the rich experience of the author intertwine. It is an excellent example of contemporary music where description of its composition includes at least the technical and stylistic elements used; however, we lack any instruments for explaining how the said elements create their intercommunication and operate as a single mechanism. It is particularly important for those who are trying to learn composition and are not prone to relate their creation with strict schemes and calculations.

Of course, the principles of the theory developed by M. Kokzhajev and their application may be discussed upon. As for myself, I’d first of all dispute against too high pretense of the said theory for fundamentality and undervaluation of some music parameters of the structural potential (for example, the aspects related to timbre and loudness are examined as elements of image only; however, their natural structural abilities arising from their acoustic and cognitive properties remain out of discussion). Nevertheless, the information provided in the book is really valuable. Although a monograph is not comparable with a theoretical course book (by the way, the creative activity of one composer would not be sufficient base for compiling such a course book), upon taking into account that course books in contemporary music composition theory do not exist in practice (with rare exceptions), this book may ne used as a handy methodic material. In addition to formation of the structural elements of contemporary music, it would help a young creator to understand the principles of communication between the said elements.

Nevertheless, there are certain obstacles between this intension and the reality. Unfortunately, this book is not freely available in Lithuania and its contents are disjoined from the target users by a language barrier. For a majority of young musicians, reading scientific literature in Russian is too difficult or even impossible. So, it would be excellent to translate this book (that is also important as an international appreciation of the Lithuanian composer) into Lithuanian or any other language understandable for large music community. Unfortunately, it is not planned in 2018. Undoubtedly, the only problem is a lack of finance. Because the national dresses and other planned projects requires a lion’s share of financing of culture (of course, this allegory is some ridiculous while speaking about culture), funds for anything else usually are not available. So, we’ll wait for the insights of M. Kokzhajev about the creation by A. Malcys in Lithuanian for an indefinite period.

On the other hand, this problem may be solved in a creative way. It is possible to invite the author to a music theory conference, to publish fragments of the book in our pere-reviewed journals and so on. In such a way, we’d ensure a better access to the valuable literature on analysis of the composition principles and disseminate the information on the creation by the Lithuanian composer to a larger extent in addition. I believe that music by A. Malcys all by itself will cause an interest, because abundant communication layers lying in it make it attractive for broad audience.