The premiere of Arvydas Malcys in memoriam of Mstislav Rostropovich 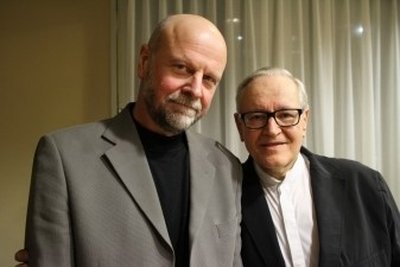 On 15 March, a concert in memoriam of Mstislav Rostropovich was arranged at the National Philharmonic. The symphony No. 4 f-moll, op. 36 by P. Tchaikovsky, the Concert for a violoncello and orchestra „In memoriam“ by Arvydas Malcys (soloist Davidas Geringas) and political overture for orchestra „Slava!“ by Leonard Bernstein were performed. Lithuanian National Symphonic Orchestra directed by Robertas Šervenikas played. On 25 March, the concert was transmitted by German Radio channel of culture, the translation was arranged in cherished memory of maestro M. Rostropovich, on occasion on his birthday – the 27 March.

The programme of the concert in one or another way related to M. Rostropovich, a legendary violoncellist, orchestral conductor, pedagogue and a public man. He had conducted the above-mentioned creation by P. Tchaikovsky for many times when it was performed by different most eminent orchestras of the world; and the vivacious composition by Bernstain was created for the inauguration concerts delivered by M. Rostropovich in the United States. The programme was supplemented with improvised happening presented by D. Geringas, the tutee of M. Rostropovich: he came to the scene with the headphones, mixed with the orchestra players and intervened in the historic audio records of political speeches by vivacious whoops, such as “Rostropovich loves Lithuanian National Symphonic Orchestra!”

However, the center of the concert was the premiere of the work by Arvydas Malcys – it was a special dedication to Rostropovich and D. Geringas, the first performer of works created by the composer. In the annotation of the Concert, the author wrote about it as follows: „I planned to create a work in a form of a memorial arch that would reflect the snippets of creations dedicated to the Maestro and the emotional states, convey fragments of his biography by music sounds in order to enable the listener to image the odyssey of the Artist. In the Concert, a five-sound refrain of Pray is repeated for five times. Five notes, five rhythmic figures – as if the epigram SLAVA – the shortened name of the Maestro used by his friends. “

The mastership of D. Geringas and R. Šervenikas was highly helpful in disclosing the idea of the composer. In the three-part Concert (to be performed without a break), the central position was traditionally provided to a violoncello; a considerable attention was paid to cantilena, dramatization and intensity of the plot (typical for Malcys). The prelude with its fairylike consonances (glissando by a harp, a harmonic language) promises a travel in the world of feelings. The part for a violoncello starts as an immersion of the traveller (the hero of the creation) into the uncertainty and expresses anxiety. The lyric theme reflects the said waiting and the niggles. Very high tones are suddenly replaced by low ones and a drama starts. The complicated passages and the broad amplitude of the registers as if conduct to unexpected turns of the life. And then, subtle lyrics sound again.

The beginning of the Part Two fascinates by long tones of solo parts, its melodiousness and the suspenseful leitmotif. Suddenly, the tempest of the percussion instruments and the flageolets of the violoncello as if poise and glissando of the harp brings us to the start of the travel like in perpetuum mobile of the life. Then gorgeous passages of higher tones gradually turn into the sky limpidity lyrics – the lyric motif (the Pray) appears again. The small cadence starts by allusions to Bach (two-voice texture). The Part Three is rapid, expressive and its rhythm is clipped. The role of a violoncello is very dramatic, as if it strives for breaking through the set limits. The dense facture causes increasingly growing stress; however, flageolets of flutes destroy it into the again appearing lyric motif that rises to very high registers. The said motif appears in different situations and as if attests the balance of mind of the Traveller and his fidelity to the eternal values. It is the end of the Concert that as if demonstrates a victory of the eternal values in the maelstroms of the life.

The originally restricting genre and the clear conception (consciously avoiding the genre inflation or post-modern deformations) maybe predetermined a transformation of the creation, according to Geringas, into a concert “composed for an atypical violoncello“. I dare to understand the said statement as a compliment for the work and an emphasis of the narrativeness of the solo part. The soloist perceived the idea of the composer about “the eternal traveller, who is often lonely”, having lost his Homeland and conveyed his nostalgia. „I played some corrected cadence: I inserted two quotations (probably innuendoesfrom Prokofiev and Shostakovich. In addition to the subtle allusions of Arvydas to Penderecki, Lutosławski and Schnittke, I had “extended” in this way the circle of friends of the Maestro. It is impossible to repeat a life of another person; however, it is able to show its reflection.... I particularly like the spiritual episode (the Pray), it is repeated for five times and always excites me strongly. While playing, I am thinking about Rostropovich and wish conveying my love to him. This creation provides a real base to express the said wish, “ – D. Geringas said.

The soloist played Sarabanda from Suite c-moll No. 3 by J.S. Bach as an encore. According to him, it was the most important quotation in the evening, because Rostropovich played it with an orchestra, so D. Geringas felt himself as if playing the role of the Maestro. In the said evening, the spirit of SLAVA was really felt and the creations dedicated to him symbolically made possible a presence of the Maestro among his friends, tutees and admirers. Beyond any doubts, the concert was an expression of respect to the Person having devoted all his life to music and abundant friends over the world.