To Find The Own Mark 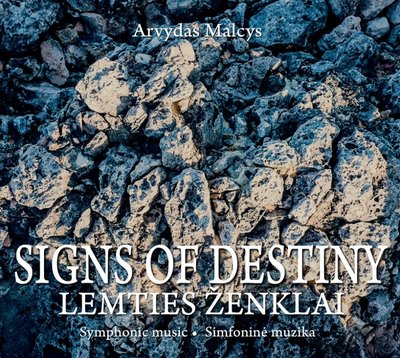 Composer Arvydas Malcys has commemorated already the year 2017 – his anniversary year – by two impressive author’s concerts and new issued compact disc “Signs of Destiny” where opuses for a symphonic orchestra created by the composer are presented. The nuances of the orchestration thoroughly planned by the author will be interpreted by well-known orchestra conductors, namely, Juozas Domarkas, Robertas Šervenikas, Modestas Pitrėnas and Modestas Barkauskas, soloist David Geringas (a violoncello) whose repertoire is extremely rich and Lithuanian National Symphonic Orchestra.

A.Malcys, having  created about 50 compositions for orchestra (including a ballet, 4 symphonies, 11 instrumental concerts, pieces for orchestra and so on), professionally combines the canonical traditions, laconic forms of music works (in particular, the concept of a cycle), quadratic  structures, consonant accords and post-minimalistic or other details, such as impressionistic and expressionistic tints of timbres, in the symphony No. 4 “The Decline of Europe” (2015) or the principle of “music in music” in “MozART Games“  (2005), or folds of the cluster  in the Concert for a violoncello and symphonic orchestra „In Memoriam of Mstislav Rostropovich“ (2009) and symphonic composition “Sign of Destiny” (2012).

The symphony No. 4 “The Decline of Europe” discloses a maturity of the creation by the composer and his profound knowledge of possibilities of the orchestra. A. Malcys creates a large opus like a novel – with an original plot, heroes and dramaturgy: “this work narrates about a perish of a flustering community that violated the rules created by itself, A. Malcys says. Composition “MozART Games” is a post scriptum to Wolfgang Amadeus Mozart and in a broad sense – to classicism. The author describes this work as a music adventure or entertainment: „I wished creating it easily and upon bravura, as Mozart did.” The Concert for a violoncello and the orchestra „In Memoriam of Mstislav Rostropovich” was dedicated to the Maestro, so it makes possible to imagine the odyssey of the Artist. In this work, as A. Malcys states, fragments of the biography of the Maestro Mstislav Rostropovich are conveyed by music sounds. In the work, fragments of concerts, their agogics and dynamics as well as the emotional experience of a person forced to leave his home land are felt. Such moods are felt in the parts of the Concert where dramaturgy formed by sharp dissonances and painful intonations predominate. An original counterbalance for the said episodes seems to be a five-sound refrain of Pray repeated for five times. Five notes, five rhythmic figures – as if the epigram SLAVA – the shortened name of the Maestro used by his friends. Symphonic composition “Sign of Destiny” reflects the tragic fate of composer Juozas Pakalnis. The composition is dedicated to 100-year anniversary of his birth. The composition that includes sharp dissonant accords, passionate passages and dark colours illustrates the painful period of the life of the Nation and the Homeland. A. Malcys told about this music work: „The ground slides from under the feet, when the expectations of your life, your future and the future of your Homeland collapse...“

Each symphonic opus of compact disc “Signs of Destiny” by A. Malcys is a peculiar composition laboratory with own dramaturgy, emotional tone and manner of composition. This music recedes from the dogmas of earlier epochs, becomes more open for creative search and modern models of composition. Each listener would find the own mark in it.