The World of Arvydas Malcys’ Music: Dialogues of the Tradition and the Present

Just a few months ago, a concert of symphonic music was performed at the Lithuanian National Philharmonic Hall, concluding the concert cycle dedicated to the 60th anniversary of the composer Onutė Narbutaitė. At the end of February, we had the opportunity to congratulate the next jubilarian, the composer Arvydas Malcys who celebrates his 60th anniversary and whose symphonic works will be presented later in the Philharmonic. On 24th of February, we heard his works for chamber orchestra in the St. Catherine’s Church in Vilnius. In this concert, titled ‘Arvydas Malcys and the World of His Music’, they were performed by the St. Christopher Chamber Orchestra of the Municipality of Vilnius and its conductor Donatas Katkus, together with the soloists Hartmut Rohde (viola, Germany), Bohdana Pivnenko (violin, Ukraine) and Vytautas Giedraitis (clarinet, Lithuania).
The announcer of the evening, the musicologist Viktoras Gerulaitis shared his own and others’ insights on the composer’s work and mentioned that it impresses him for being just “of the right kind”. This abstract notion could be understood differently – as a consistent, systematic constructivism, as a social engagement to convey various “truths”, or as a pursuit of harmonious sound. V. Gerulaitis highlighted the latter aspect: according to the musicologist, A. Malcys “does not bother” listener with experiments, but writes vivid, beautifully-sounding music that’s nice to listen to. Indeed, the concert showcased the composer’s aesthetic tendency toward consonant sound and logical, organic dramatic development, as well as the aspiration for compelling emotional expression. Congratulating the composer, Zita Bružaitė, the chairperson of the Lithuanian Composers’ Union, pointed out that the music of A. Malcys is varied – jolly and sad, vivid and lyrical, but always suggestive. Perhaps we can say that this is evidenced by the success of the composer, if we measure it with a lot of performances and sympathies of the musicians. (A. Malcys’ creative partners include well-known performers, cellist David Geringas, violist Yuri Bashmet, violinist Sergei Krylov and others.) The fact that A. Malcys‘ music is needed is also evidenced by the great productivity of the author (about fifty orchestral works and even more chamber opuses) – hardly any composer would be so prolific in the absence of demand. 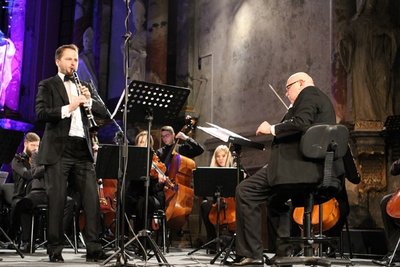 Still in 2009 Šarūnas Nakas wrote: “Breaking the aesthetic boundaries (maybe quite inadvertently?), ignoring the major strategies (maybe without an ill will?), Malcys simplifies many other aspects (musical language and form), becoming immensely attractive to the performers (even very famous), who profess the classical canon but who are looking for (at least sometimes) something fresher than the works of classics from one and a half hundred years ago. Such dialogue with classical virtuosi is (probably) the most important impetus to the composer’s productivity.” (Arvydas Malcys: “...Music has to flow, live, tell...”) It’s really not surprising that the coherence of the technical possibilities, emotional expressions and clear classical forms is appealing to the performers – there are no extremely complex experimental passages, although the composer does not avoid adding some extended techniques to enrich his soundscapes. Listening to this music, you will feel its colourfulness and freshness, together with the maintained harmonious sound of the whole. In addition, the performer is given sufficient space for powerful interpretation. In St. Catherine’s Church, along with other opuses, we had the opportunity to hear the Concerto for Clarinet and Chamber Orchestra (2007) and the Concerto for Violin, Viola and Chamber Orchestra (2012), the performances of which was a live proof of why A. Malcys’ music is favoured by the performers. V. Giedraitis, a young and unquestionably talented musician, performed the Concerto for Clarinet dedicated to the late clarinetist Algirdas Doveika, revealing sensitive lyrical character of the second movent in memoriam with a very expressive and nuanced sound, while the vivid first and third movements unlocked the virtuosic horizons, which the clarinetist conveyed with a light, playful and active sound, especially fitting to the character of the final Scherzo. This composition, just like the Concerto for Violin, Viola and String Orchestra, is composed in the tradition of the classical concerto genre: the structure of three movements (fast-slow-fast) and the opposite roles of the soloist and the orchestra, so the soloists have plenty of opportunities to unfold as artistically and technically capable performers. The violist H. Rohde and the violinist B. Pivnenko, performing the above mentionad Concerto, turned out to be right of the such kind, even though the violinist’s charisma and fire slightly overshadowed the violist. But both of them, telling personalized musical tales, sounded coherent and uplifting.

The Concertos represented the field of “absolute music”, while the titles of the other four pieces for chamber orchestra suggested more romantic, perhaps even impressionistic inspirations – for example, Cleaved Silence (2004) or Hyacinth of the Snowfields (2013). These two compositions, which are quite different in their mood, were performed by the St. Christopher Chamber Orchestra with a convincing expression, but while listening to the bright, repetitive Hyacinth of the Snowfields, there was a shortage of sharper articulation that would furhter enhance the freshness and glow of the angular snowy landscape. Performing the opener of the evening, the dramatic Cleaved Silence, the orchestra masterfully immersed the audience into the field of active impulses, filled with both separate “sparks” and sonorous “cluster balls” of them. Yet another piece performed in the concert – The Kite of Hope – is like homage to Mozart; according to the composer, it was an attempt at lightsome and bravura, tonal music, such as that of W. A. ​​Mozart. The composition, although not filled with typical and recognizable Mozartian motives, met the spirit of the Viennese classic with its bright harmonies and playfulness which the orchestra brought out aptly. The last piece in the concert and the latest in the list of works by A. Malcys, Bolero (2017) is another homage, this time apparently to Maurice Ravel. It seems that the composer did not indend to declare his own originality or individuality while writing this piece; what was much more important for the composer – to retain and to remind the audience of some important artifacts of cultural memory, such as Ravel’s Boléro (1928). In the program note the author announces that “the associations with the music of the past and warm up the work of the present. I believe that today both performers and listeners are longing for spectacular, unforgettable moments (...) for which they could grow fond of some new piece of music, like the music of Mozart, Schubert or Chopin once...” Malcys’ Bolero reminded of Ravel’s opus not only with the ostinato rhythm, but also with the choices of instrumentation, colours, and form (the theme with variations). It is a kind of reverent tribute to Ravel, using the historical link and benefits of the work from the past, in order to get closer to the listener through the musical experiences which are familiar and pleasant to them.

As Š. Nakas wrote once, A. Malcys is a “traditionalist with a postmodern virus” (ibid.) Combining time-proven forms, genres, and the “new consonant sound” with sharper and expressive impulses, he wins the sympathies of the performers and many listeners.